Up to this point we sure had done more than most do in Vegas, but that’s how we like to travel. Make the most of the spots that we hit. It is likely that we won’t be back for a long while and if we do go back it will just be for a short trip.

Day 5 started real early, and consider we stayed out so late the night before on Fremont St, 5am came way too early.

When the bus came, it was a little smaller than I thought and the driver didn’t say too much, so I thought it was going to be a long 10 hours. However, it was just the shuttle to the bus terminal where we got onto a larger coach bus with a much more vocal bus driver.

On our way we made a quick stop at the Hoover Dam but that was old news, and we already had the t-shirt (figuratively speaking). After everyone else returned to the bus we headed for Kingman, Arizona for our first rest stop. We stopped at a McDonald’s, which for me didn’t really work as I haven’t eaten there in many years. Figured I would get a smoothy and a hot apple pie. Meg and I sat down outside with our hot apple pies and smoothies at a vacant table with an empty tray on it. I finish my apple pie and all of a sudden a gust of wind kicked up and launched the discarded tray right at my face. Not only did it hit me it knocked my full smoothie to the ground. Luckily I avoided getting smoothie all over me, but I was left with only a few mouthfuls… It was obviously a sign – no more McDonald’s for me!

After another 2 hours and a movie later we made it to the National Geographic visitor centre for a quick lunch and an IMAX movie before we set off into Grand Canyon National Park to see it first hand.

It’s safe to say that the Grand Canyon is different from anywhere else in the world. It was amazing to see just how big it actually was. It is definitely a place you need to see with you own eyes as pictures don’t really do it justice. 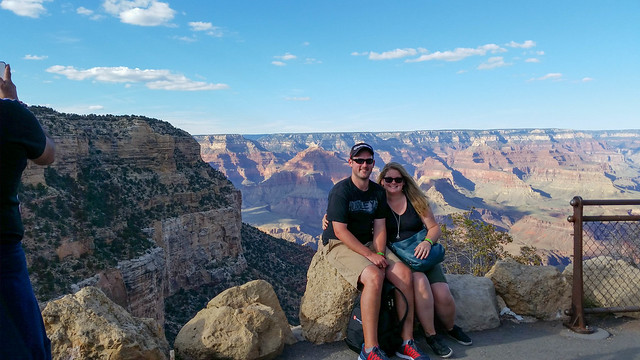 On our visit we stopped at two points. Mather point and Angel Lodge. At Angel Lodge you can rent rooms and stay the night at the Grand Canyon where there are many hiking trails taking you into the canyon. 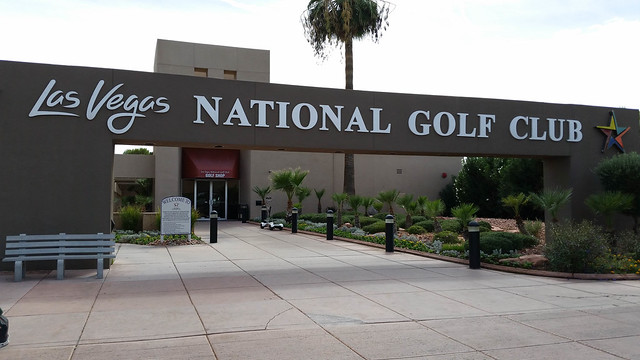 When we planned to bring our clubs with us to Vegas I was looking for some unique golf experiences. Sure golfing anywhere in Vegas would be a new experience, but something different than home and something that didn’t completely break the bank. There were many options that we could have paid upwards of $200/person for a round of golf but that wasn’t quite what I had in mind. Enter Las Vegas National Golf Club. This course not only hosted many of the Vegas crooners of yester year and the Las Vegas Invitational but they offered something no other course in Vegas did, Golf Boards! Haven’t heard of them before? It’s like a four wheeled surf board.

After our first round at Angel Park, we hesitated, wondered if we should use them. It was still cart path only here so there would still be a lot of walking. However, the day looked like it was going to be a little cooler, so we went for it.

After a little lesson we were off. Luckily the course was basically empty so it was smooth sailing most of the day. When you first start riding a Golfboard you tend to use your arms a lot to steer which gets very tiring very quickly. After 3 holes both Meg and I were thinking we might only use them for 9 holes. However, we persevered and by about the 5th hole it seemed natural, just like the Segways. Instead of using our arms to steer we used our body weight and leaned into the turns more. 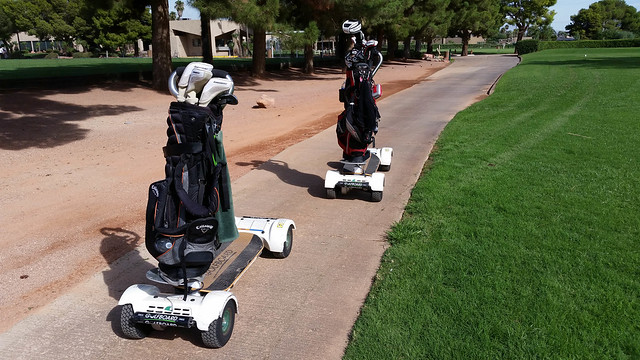 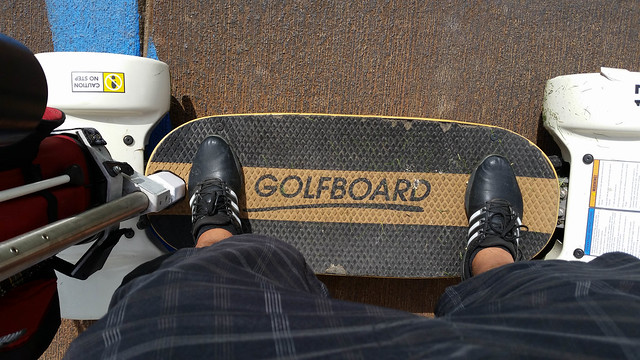 We finished the round in our usual 3.5 hours which was a big change from our 5+ hour round at the busier Angel Park. Meg was so happy with her round she started a new tradition of getting a ball marker from course where she breaks 100 (or 90, she hasn’t fully decided yet). It was certainly a great experience and if we get the chance to ride the Golfboards again, I think we would jump at the chance. 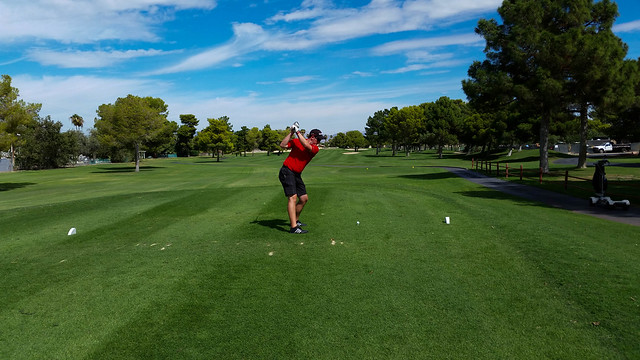 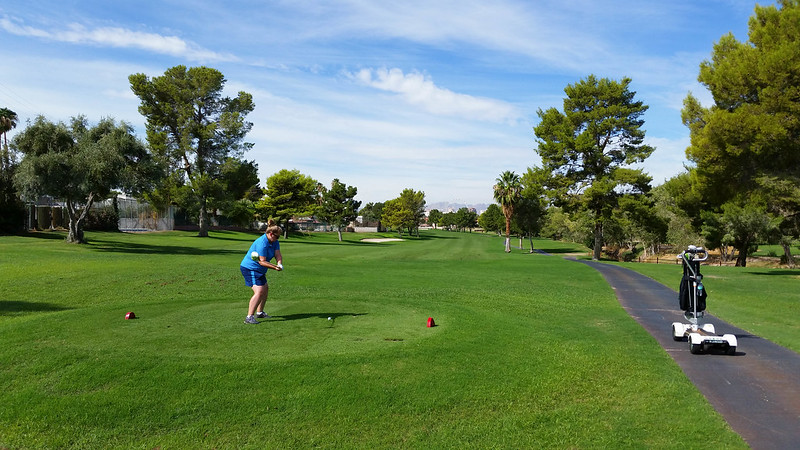 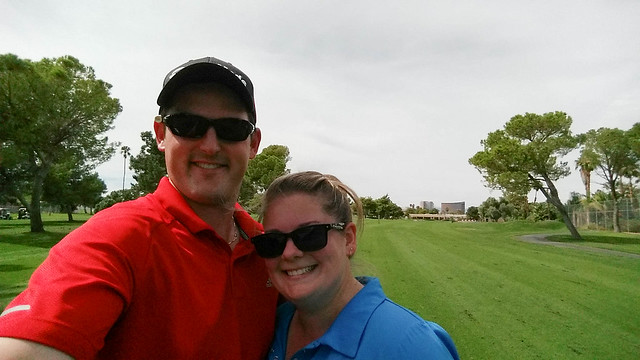 After golf we headed back to the Rio via Uber, and our driver liked to take Uber-selfies with his passengers. We of course obliged, what’s the harm…

That night we had tickets for Mystère, which is the longest running Cirque du Soleil in Vegas. That meant we were headed back to Treasure Island. This was our first Cirque show, but our expectations were high from all the high praise we had heard. We were not disappointed, it was funny and awe inspiring. The things that people are able to do with their bodies was absolutely amazing. They make it look easy to break the laws of physics. I would also have to say that this show has a healthy dose of weird…

I don’t have any photos from the show, but this video gives you a taste of what it was all about.

This was also our last chance to hit the big jackpot! Before the show Meg and I sat down at the video craps machine. It was an easier way to learn the game, so Meg put in $20 to get started and I put in $50. Unfortunately Meg lost her $20 pretty quickly (she just doesn’t have the right luck for Vegas). I quickly went up to $75, but then just as quickly almost lost it all. Eventually I got it back to $25 before cashing out and heading to the show. I figured I would try my luck again later after the show and dinner, so after dinner I put the $25 back on the line. By this time there were more players and things started to heat up again. I ended up back at $50 and I cashed out even. Meg breathed a sign of relief.

Our flight home was at 12:20 and the shuttle picked us up at 9:30 so it didn’t leave us much time on our final day to do anything other than have a good breakfast.

The flight home again was uneventful, and we landed around 7:20pm. It took a little longer to get our bags but we had successfully flown with our clubs once again without incident (*Knock on wood*).

Since I was still on pacific time and we had the following day off work still I figured there wouldn’t be any harm in going to play hockey at 11pm, and since the timing of our flight worked out perfectly I was back home just in time to make it. Glad I did as we ended up playing a real good game. I suppose I brought home a bunch of luck from Vegas with me!

The next morning if was finally time to pick up Nate from my Mom’s. I had been far too long since we last saw him or chatted with him. When we opened the door he greeted us with the biggest “Momma! Dadda!” with running hugs and kisses. I was just what we were hoping to get. We were also very surprised at how many sentences he was stringing together. It’s crazy the difference a week can make.

Overall it was a fantastic trip and experience and a great way to celebrate our dirty 30’s. But without question Las Vegas is definitely different.