Our journey to PEI began at 8am after a quick breakfast, we headed straight for the Confederation Bridge. This bridge was absolutely amazing, at 15k long it took just under 10 minutes to cross at 80 km/h. 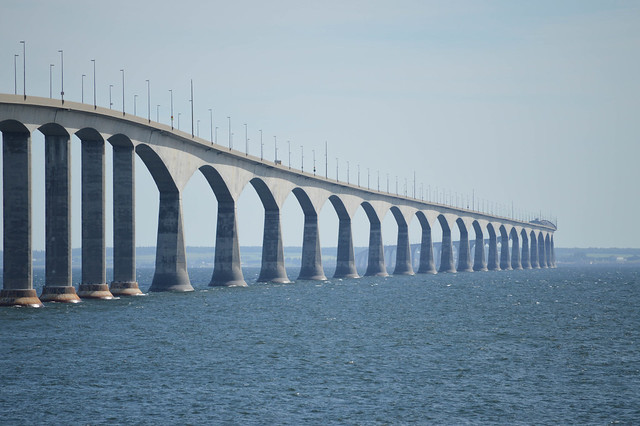 Up on the bridge there isn’t much to see, Meg wasn’t tall enough to see much beyond the concrete barriers! Once we made it to the other side, we drove around to find another lookout where we could get a shot of the other side. 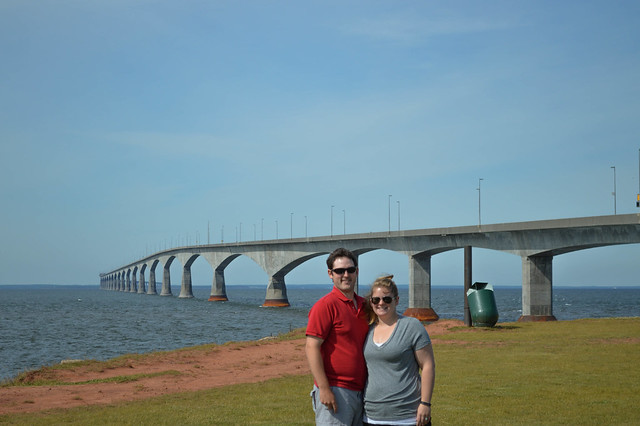 On our way to Charlottetown we took a detour through a sleepy little town called Victoria. This was one of those small towns where literally everyone knew everyone. The locals didn’t even bother with swimming on the beach, they just walked down the boat slip and into the harbour. They were some interesting stories about the two block by two block town, and tons of little shops, but we decided to head on to Charlottetown.

We made it to Charlottetown just before noon, and made our way to Victoria park, which is right by the water. Well almost everything is by the water here since it’s an island after all… We found a spot on the grass with a great view for a little picnic lunch before we went off for the rest of the day.

After a little stroll through downtown Charlottetown, we headed to Point Prim for our Happy Clammers dining adventure where you eat what you catch. Can’t get much fresher than that! Neither Meg or I hadn’t eaten clams before, so why not start with ones we caught ourselves?

Before the fishing/digging could begin we had some extra time to go and check out the Point Prim lighthouse, the first and oldest lighthouse in PEI. After previously finding a few lighthouses locked, this one was surprisingly open and we could even climb up to the top. There were a total of 5 floors within it including a bedroom and the actual light room. The stairs were impossibly steep, but worth it to get to the top. 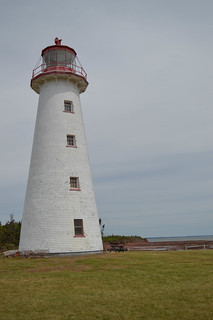 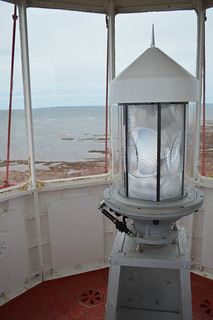 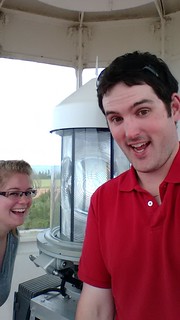 After we worked our way down the stairs (without killing ourselves) we headed out to get our clam on. Armed with a shovel and some other clam digging tools we set out to catch our meal. There were 16 of us, so these clams never stood a chance. Gilbert was amazing at telling us how to find them and the rules and regulations around it. 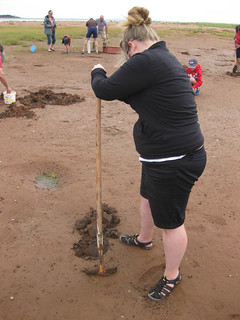 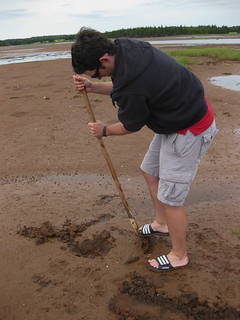 After it was all said and done the group headed back to Gilbert and Goldie’s home with quite a healthy load. 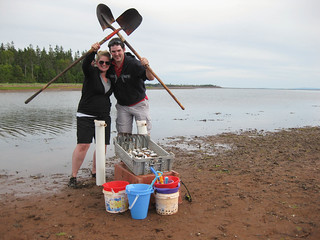 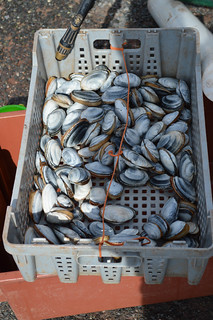 Goldie took the fresh clams and put them in a pot to steam them up perfectly. Goldie gave us a lesson on clams and showed us some amazing shells – one oyster shell was approximately 40 years old before it died! Once seated, Gilbert showed us how to properly open and clean the clams by hand, and the feast was on! But they weren’t done there. Next was some bar-clam chowder, which made it three chowder days in a row for me! We finished with a dessert of strawberry shortcake. Gilbert shared stories about his fishing past and present, Goldie gave us a tour of the beautiful mini nautical museum they have in their home. Incredibly warm and inviting couple, if you are looking for a one-of-a-kind and truly local experience, this is a must do!

Day 2 – The Links at Crowbush Cove

Finally it was time to play some golf! Before our twilight round, we had some time to kill in downtown Charlottetown. The night before we did some searching for things to do and found a little walking tour put on by the confederation players. A small group of actors take on the roles of some of the most historic people involved in the confederation of Canada. They dress up in the period clothing and stay in character throughout the day – we ran into the town cryer who told us all about his arsonist son.

Nether Meg or I were ever big into history but seem to find ourselves interested in historical tours of cities we visit. This one sure didn’t disappoint. Luke, our guide from New Market of all places, was very knowledgeable. His parents were visiting and in our tour group, so I’m sure he did an extra good job! The tour took us through downtown Charlottetown and concentrated around the events of the confederation down historic Great George Street, and ending at the Province House where the Canada was conceived. 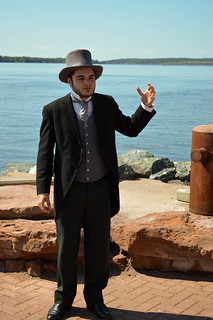 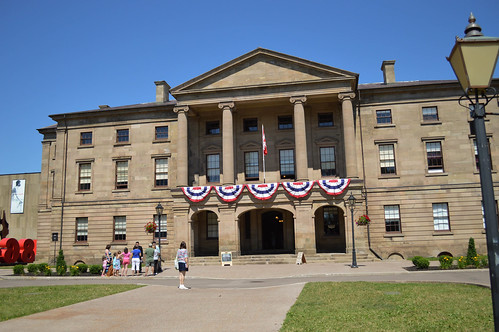 After the tour, we had lunch reservations at the Water Prince Corner Shop which was a highly recommended (it was also on the Food Network – Video @ 18min or the 3rd break point). It literally looks like a corner store, but the food that comes out of there is absolutely amazing. We split a scallop burger (5 breaded and fried scallops on a bun), and a 2lb lobster meal that included a bucket of mussells, and lobster bibs! If you are in the area you need to check this place out. 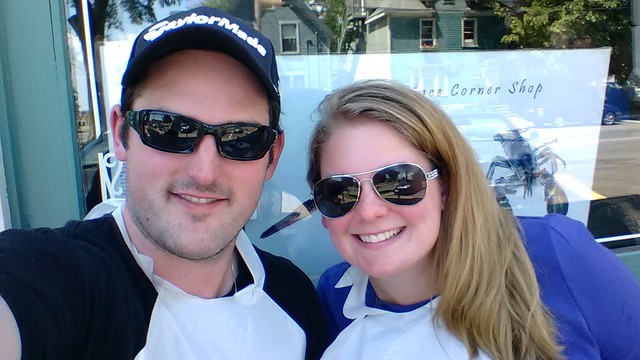 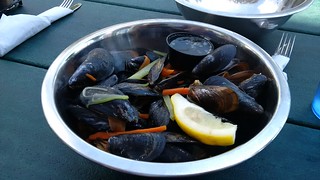 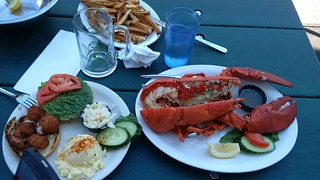 With full bellies, we traveled 30 minutes north to the Links at Crowbush Cove in Morell. We knew this was going to be a beautiful course but we were in for a real treat! Crowbush is situated on the North shores of PEI. I won’t spend too much time explaining the beauty, instead I’ll let some of the pictures do that. However, if you are in PEI and looking for a great place to lose some golf balls – Crowbush needs to be on your list. It’s a bit pricier but the course is immaculate and you can’t beat the views. 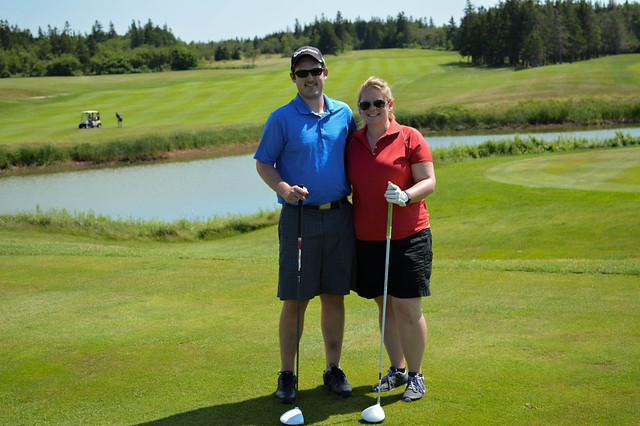 Definitely glad we brought our own clubs, helped make the round that much more enjoyable. If we are in PEI again I think we will need to come and play Crowbush again. It was certainly worth every penny! 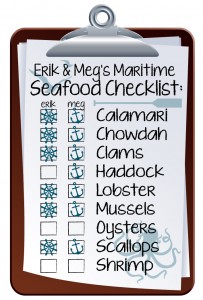 It’s about that time to update our Seafood checklist! In PEI we definitely took full advantage and knocked many of the items off our list.

That was it for PEI. Nova Scotia is next!

If you can’t get enough of our photos, don’t forget to check our Flickr album!