For our 30th birthday’s Meg and I decided to go to Las Vegas to celebrate, and last Tuesday we set off for our adventure.

We probably didn’t leave ourselves enough time to get the airport stress free, as we hit bumper-to-bumper from Cambridge to Guelph. But through the traffic, the wait for the shuttle, and then going to the wrong terminal, we made it to our gate in plenty of time.

The flight was fairly uneventful, but this was our first time flying with WestJet (why we went to terminal 1 and not 3). It became clear pretty quickly that people at WestJet do things a little differently. Any chance they had, they made a little joke. For example, when they introduced the flight to the city of “lost wages” instead in Las Vegas.

After a little tour around the different strip hotels we finally made it to the Rio, which we would call home for the next week. Upon arrival to the hotel I got my first taste of “this place is different”. Walking into the hotel you are immediately into the casino with the smokey, air freshened air that is pumped in.

On our first full day we didn’t have anything specific planned so we took the opportunity to wander around the strip. Because the Rio is slightly off the strip they offered a free shuttle to Bally’s which we took advantage of regularly.

We made our way past the Bellagio, where we ended up seeing a surprise day time showing of the fountain. They must have been doing a test rest for the night-time shows. It was very cool even during the day time, but we knew we had to come back later for the evening shows. 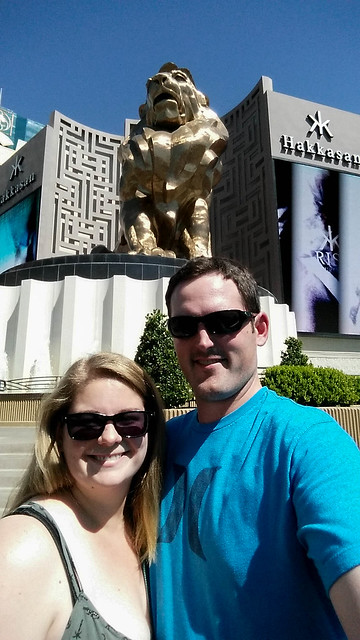 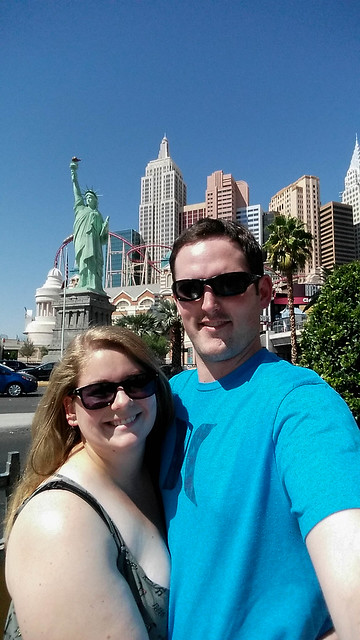 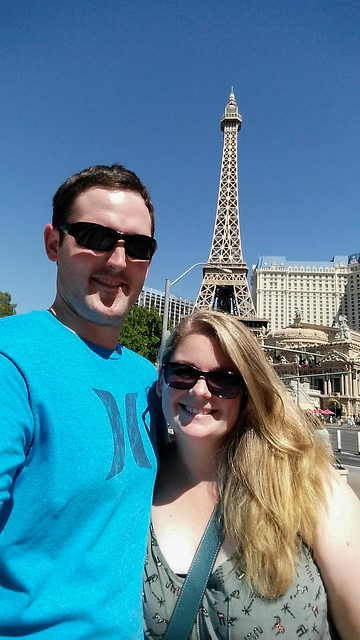 During our walk one thing was clear. It was HOT here September and we needed to keep water on us at all times. After we had enough of the heat and made it to a store of stock up on water for the following day of golfing. Back at the hotel we decided to go and see if we could become that latest jackpot winners… right… Meg headed for the dreaded penny slots while I went to the craps table to shoot dice. Things started well but quickly the table became cool. After our time at the casino, Meg was down $40 and I was down $120. Not a great start…

For our first dinner we headed for the sea food buffet at the Rio. We made sure to bring a big appetite, and it was a good thing we did. Boy was it good.

The first night we had tickets to go and see Penn and Teller. I had heard so many good things about them I felt like we needed to see them. The show did not disappoint. They have a unique act where they don’t try to pull the wool over your eyes about their “magic”. But even when you know what they are doing the do something completely different, they are true masters of their craft.

On day two it was time to hit the desert links. We didn’t rent a car so we needed to find a way to the course. We decided to give Uber a try. The service worked awesome! Open the app request a ride, you get the name of the driver, the vehicle type and an ETA. Then when you get picked up both the driver and the rider have a map to the destination. Finally you don’t need to hand over cash, the app does it all. So smooth!

Our first of two rounds of golf took us to Angel Park which was designed by the King himself, Arnold Palmer. This course is near Red Rock canyon and offered some great scenery. Although it also meant it was in the middle of the desert. In the sun it would have been close to 45c, and 40c in the shade. Meg and I have played in the heat before but nothing like this. We were pared up with a nice older couple Gerry and Roz, who were from New York. They made the round very enjoyable and at the end of the day Meg shot 98, and I shot 82 with two birdies (both were close to being an eagle). 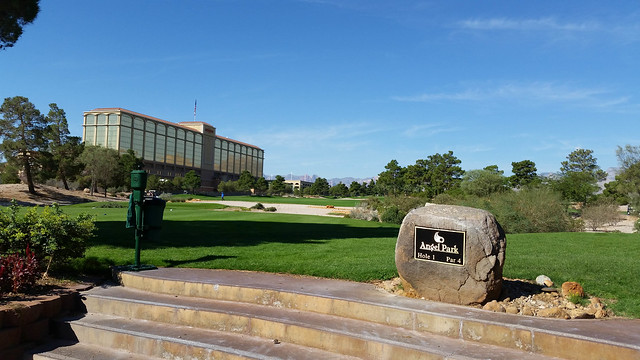 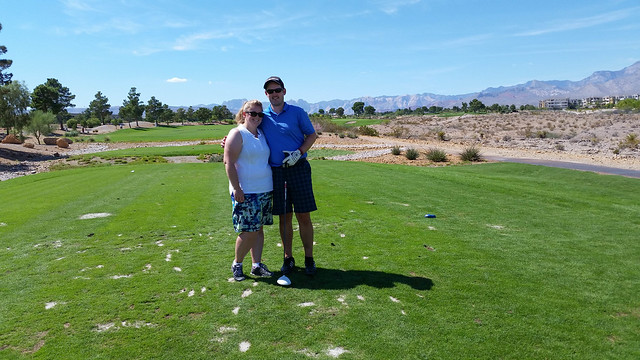 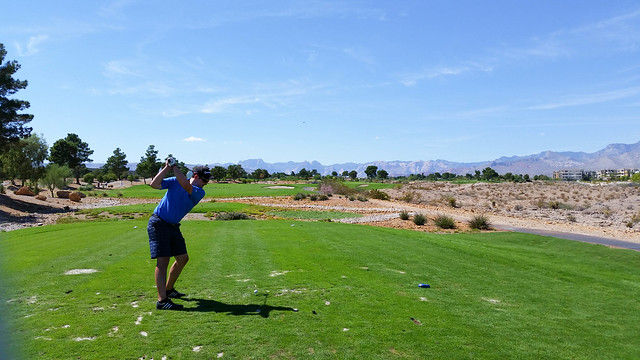 After the round we called up Uber again to get back to the hotel since we were headed out to shoot some guns later that day.

One thing that I liked about Vegas is that most attractions offered free shuttles too and from their location, which saved us a lot of money. The Gun Garage was no exception. When we finally arrived at the Gun Garage we got a little tour, but got right to the reason we were there. Meg ended up getting the starter package which included a Glock 19 and an MP5, and I went with the Zombie Package (you can never be too prepared), which included the same Glock 19, AK-47, Uzi and a shotgun. As part of my package I got to choose two zombie targets, which offered me the chance to see if I could save Meg if she was being attacked by a zombie.

We both did pretty good with our shooting. With the Glock I was able to get just the zombie and not the female victim. However, with the Uzi, she was not so lucky… so note to self, use a pistol. I saved the clown for the shotgun. He never stood a chance! 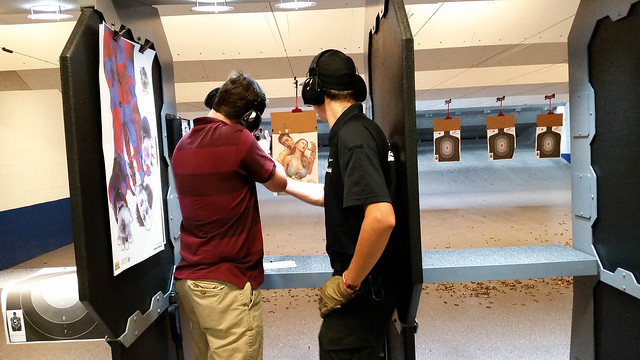 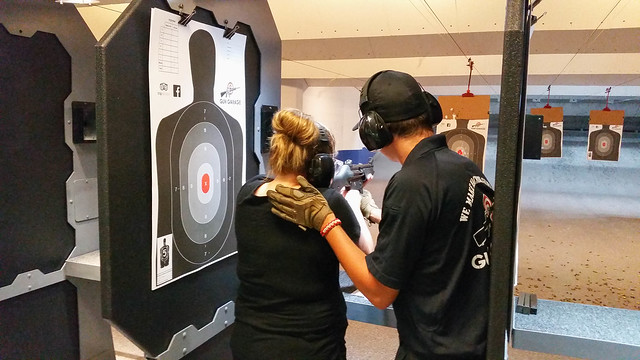 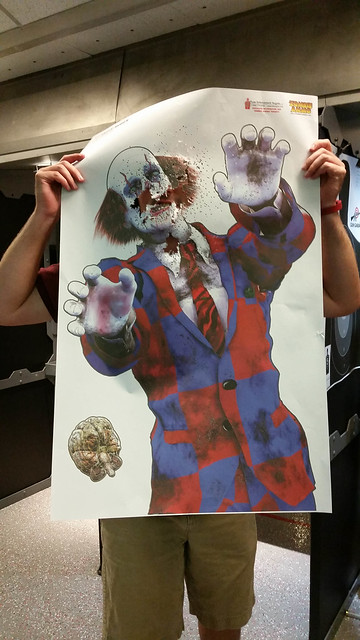 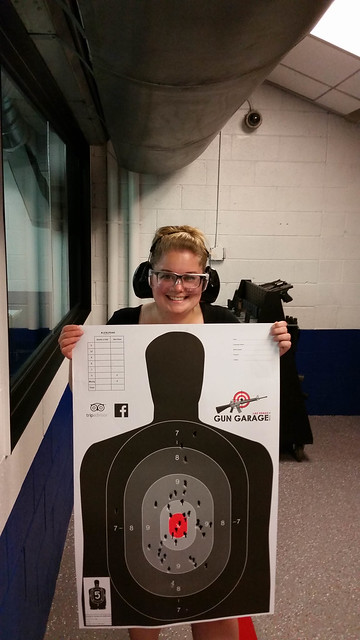 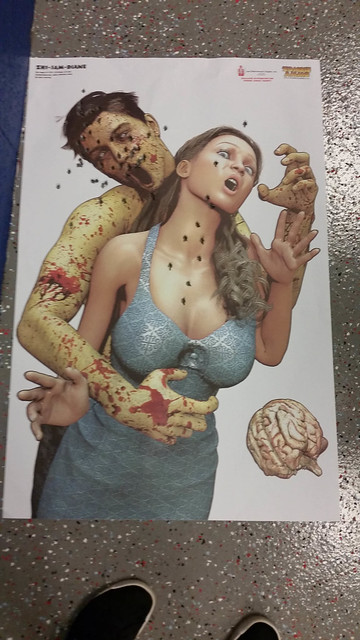 After we finished shooting they asked if we wanted to shoot anything else. Meg was good but they were able to sell me on the .50 cal rifle. That one packed a whole lot of punch! See for yourself. 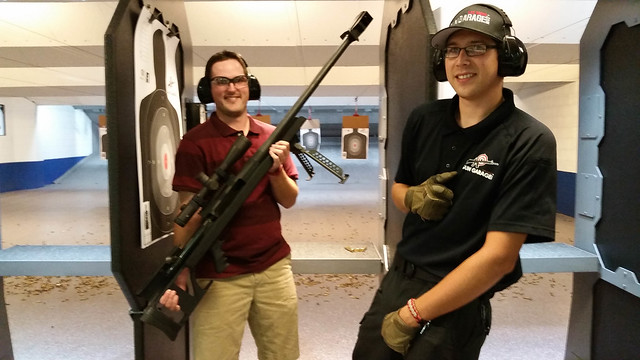 With that checked off the list it was time to head back to the strip for dinner at Senor Frogs in Treasure Island. Food was good, atmosphere was loud, but overall a good place to eat.

After dinner we headed for the Bellagio to catch the fountain at night. Simply put – it is awe-inspiring. Shows went every 15 minutes and we stayed for 3 of them. We probably could have stayed all night but we needed to get up early the next morning to head to the Hoover Dam. 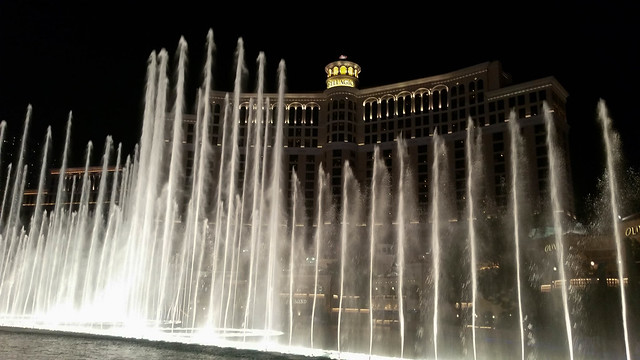