We received the amazing Vitamix blender from my amazing mother-in-law for Christmas and I took it for a spin yesterday for the first time. I made my first batch of baby food – carrots were the first on the menu. I took the Vitamix out, washed it up and quickly realized there were some extra switches on the front… Better read the instructions.

So, when you turn the machine on or off, the “High/Variable” switch must be in the “Variable” position, and you should start blending on 1 and work your way up. However, once you max out on the variable settings, you need to switch the “High/Variable” switch to “High” as this is the most efficient setting and won’t burn out your motor (since if you blend too long on the low setting you’ll trigger the auto-off function to prevent motor burn out). Then before you turn it off, it has to go back into the “Variable” position.

Uh, okay… read it a couple of times, but yeah makes sense. Time to try doing it.

I started off with some baked carrots, switched it to ‘variable’ and hit the ‘on’ switch. Then gradually turned the speed dial up and up and uh oh the carrot mixture stopped moving, oh god, I need to tamp it down, oh no it’s really buzzing and UUUUUUUH the auto-off trigger hits. SUPER.

I feel like driving a standard car would be more simple.

So I gave it ten minutes to cool off. This time I was prepared, I had the tamper in, added a little water and tried again; turned it on, started the dial at one again, turned it up faster this time, tamper tamping and then switched the “High/Variable” to “High” – Alright! Now we’re getting somewhere! Switch it back to “Variable” and dial back down to one and turned it off. Okay, I’m getting the hang of it now!

In the matter of a minute (once I figured it out), the carrots had been turned to complete mush – which was the desired outcome.

Nate didn’t seem phased in the least by the different taste or texture… Sweet potatoes are up next week, we’ll see how it goes! 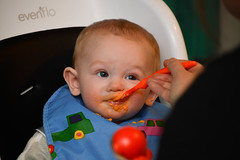 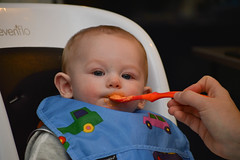 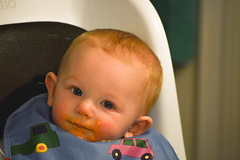