It’s been some time since Nate was in the pool in a formal way with an instructor. He’s been in the pool many times at daycare where he learned how to use “spoons” and not “forks”. The biggest difference this time was he was doing it by himself.

Of course, Meg and I had reservations and wondered if he would be too clingy and wouldn’t go in. That’s how it worked when he was in gymnastics and soccer. However, we agreed it was a good first step, knowing he’ll be headed to school in 5 months (WHAT?! Mommy is not ready…).

To prepare, the weekend before, we all went out for a family swim and he had a ball. He wouldn’t put his head under or float on his back but he loves the water. I suppose that shouldn’t be a surprise. Both Meg and I were fish when we were little.

He was certainly excited today to go and get into the water. Especially the “cold” pool. 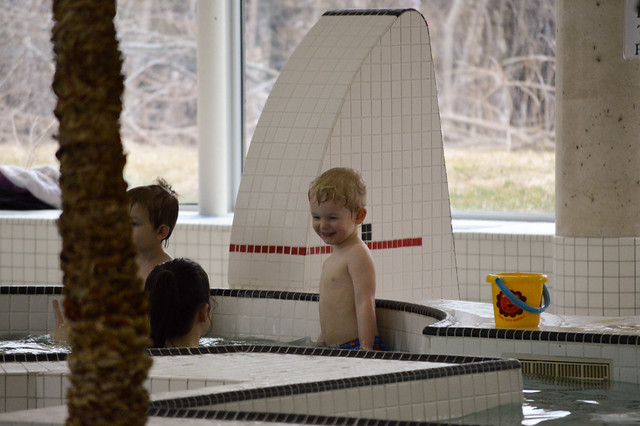 Besides the mad house that is the gangway into the pool area from the change rooms. Everything went smoothly with the handoff to the instructor. He left me without even looking back and was soon into the warm pool for his lesson.

He listened intently to the instructors in the pool. Even letting them dunk him under without a complaint. He went as far as dipping his face under the water all by himself without much prompting.

Every time I looked over at Meg, there was a huge smile of a proud mama all over her face and I am sure I was the same. (Mom edit: I was smiling through the tears. Having an internal conflict of seeing him not need me, but being so proud of my baby-turned-big boy)

Nate continues to defy and surprise both Meg and I, in regard to how he will act in new unknown situations. It makes me confident as his father that he will be ready for new things in the future.