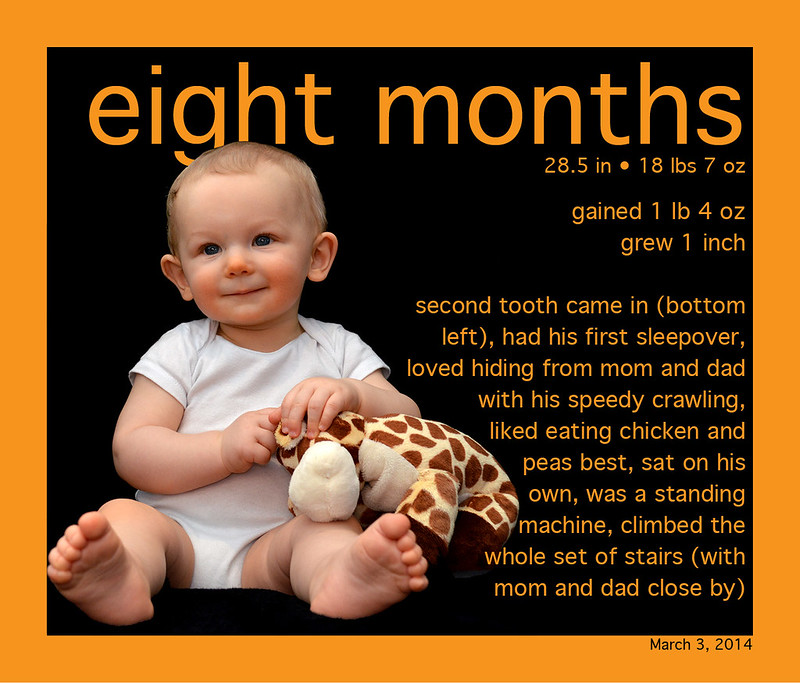 Yet again, I’m surprised by how fast time is passing – but I think I can honestly say I’m loving every minute. Nate’s been such a happy camper these last few weeks, it’s making the thought of going back to work at nightmare.

He’s been eating like a champ, this month we put in all the major proteins (chicken, beef and pork) and while he seemed to enjoy them all, chicken was the favourite. We only introduced one new fruit this month – raspberry (mixed with apple) – which seemed a bit too tart for his liking, but that seemed to be the only thing he really turned his nose up at. We snuck in a few more veggies: onion, garlic, corn and green beans. Corn didn’t go over great, but mixed in with some peas or beans, he didn’t notice!

The second tooth came in, and I’m pretty sure the top one is working its’ way in judging by the chewing and drooling these past few days. Red bum made a minimal appearance with the second tooth compared to the first tooth – thank god.

He’s motoring around like nobody’s business, and stands every chance he gets. He’s trying to stand on his own, every once and a while pushing off to see if he can stabilize. He can’t for much longer than a few seconds, but I worry once it comes he’ll quickly progress to walking.

Nate and Guinness are interacting more and more each day. I tried to get some video of them playing a few days ago, as Nate waved around Guin’s ring and Guinness pouncing around grumbling at him. It was pretty amazing to see Guinness being so playful yet gentle and Nathan laughing hysterically. I think Guinness actually makes Nate laugh more than Erik or I do.

He’s packing on the weight and on the chart again, growing a full inch this month – we’re just about ready to move into the next car seat at the current one maxes out in another half inch.