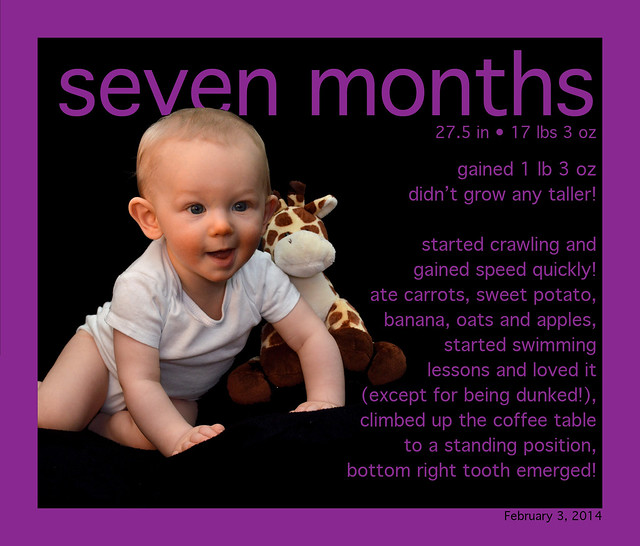 Boy, oh boy! This month seemed so long, but I think it’s because of all the new things that have happened over the last 30 days! We started Nate on solid foods this month – made in our awesome Vitamix! Started off with carrots, then moved on to sweet potato, so his skin has that lovely oompa-loopa glow each time he eats it! We decided to throw some fruit in the mix, so he tried bananas and apples and mixed in oat pablum near the end of the month to try some other grains. I think his favourite may be a tie between carrot and apple.

Started swimming lessons this month as well. We spend most of the lesson in the warm pool, slightly cooler than a hot tub, but still incredibly relaxing. We had to go in the regular pool for “jump ins”, and a few dunks, but that pool is pretty warm too, I believe somewhere in the low 80’s if I had guess. It takes us longer to get ready and dressed afterwards than the amount of time we actually swim for, but it’s fun to get out none-the-less.

Somewhere in the middle of it all, Nate sprung a tooth! We had a rough day or two because of it, but mainly due to the raw bum, the tooth itself didn’t seem to bother him much. He may have been too preoccupied with crawling since he seemed to cut his tooth the same day he learned to crawl! Luckily we had the gates all secured prior to this evolution, since it seemed like it only took him a day to really get the hang of it.

And just when we thought the month’s progress had peaked, Nate decided he would pull himself up into a standing position! He did it the first few times on the coffee table, and now does it on people’s legs, couches, laundry baskets, diaper boxes, pretty much anything he can get his hands on to. We’re in the process of practicing how to fall down properly – he has the tendency to thrust his pelvis forward when falling backward so he lands on his head rather than his bum… but we’re learning that landing on the bum is much better.

He’s a little giggle monster and I love him more and more each day!

We’ll see how the monthly pictures progress from this point, this one was hard to grab now that he’s mobile!