It took a little longer than Meghan and I had anticipated, but we finally got Nathan home at last. 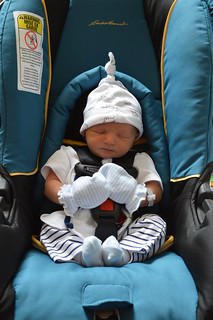 Nathan finally got to take his first car ride, and sit in his car seat. He looked so small in it! The car ride went well with Meg in the back seat keeping him company.

We were finally so close we could see our house. But the trip would need to be extended a little more. I had to go pick up the mail… being away from the house for 3 days really allows for it to build up.

We work our way into the house and call for Guinness to come meet his brother and make the all important first impression. He gingerly came down the stairs and really didn’t take notice at first. Early that day I had picked up Guinness from daycare and gave him some of Nathan’s clothes from the hospital to smell. Now if you know Guinness, you know that he is a wild one especially with new people (even new little people). However, at daycare he had so much fun running around with this furry friends that all four of his paws were raw and sore. He was having trouble walking and really wasn’t himself. This did have the side effect that he wasn’t too excited to see Nathan, and was calm about the entire thing. The intro must have gone well, as Guinness likes to lay near him already. 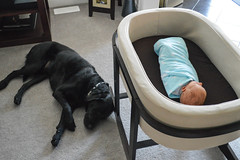 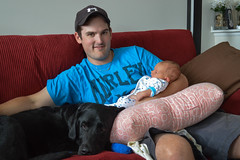 We were not home long when Nathan wanted something to eat. Feeding went as expected the same way as it did at the hospital. What didn’t go as expected was has changing. It started the same, but when the diaper came off Meg thought she would cool him down a bit and blow on him… he replied by peeing. But he wasn’t done there… he then pooped as well. Luckily the old diaper was still under him, but we have taken note and we have learned from this (so we thought…). The very next change, I was changing him and don’t you know it, he pees all over me. Nathan is the only person that can pee on me and I can still say “I Love you” afterwards. I suppose this is all part of the initiation into the parenting club.

After spending the weekend together and learning each others schedules we will be free to have guest this week. If you want to come visit our little man, just give us a call or send us an email and we can set up a time.