We’ve been researching strollers/travel systems for a while now and opened my email yesterday to see the one I had been leaning towards on sale! A whopping $130 off! Woot!

Introducing the Eddie Bauer Pilot Travel System – City Slicker. The Babies’R’Us site didn’t have any reviews on this particular model – there were quite a few for the ‘Dash Point’ version (the green/yellow one) and the reviews were split. Half seemed to love it, half seemed to hate it. So I decided to go and play with it after work yesterday and review it myself!

The infant carrier came off without a hitch. Re-attached without a hitch, and seemed very secure. The carrier itself wasn’t the heaviest one I tried, but comparable to most. I don’t think they CAN be that light to provide the proper safety/security – so not sure how much lighter it could be.

Wheeled around the stroller a bit and the wheels made it extremely easy to maneuver – even with one hand (keep in mind I was pushing it around with my purse in it, not a baby). Breaks were fairly good, I’m not sure if I would trust them enough to let go atop a steep hill, but really, would anyone really do that anyway? The front wheels can be locked in position to ensure the stroller goes straight, or unlocked for the easy twisting and turning. Personally don’t know how often I would lock them to go straight or where on earth you’d be walking that requires no turning, but maybe on top of that steep hill, I could lock the wheels and turn the stroller sideways, then it won’t go anywhere!

I really enjoy how easily it collapses – a lever on each handle and a safety button on the right handle (sorry lefties!), put your foot on the wheel axle and pull up. BAM. Collapses down in a jiffy! I like this one because when it collapses it does so in almost a square, rather than a long rectangle that would take up my whole trunk.

Now trying to pull it back apart seemed to push my baby-brain to the limit. I tried the levers again, the safety button, from the front, from the back, from the side. Shook the damn thing. At which point an older gentleman happened to walk by, “That’s right, put that stroller through the ringer!” and I suppose from the look of frustration on my face decided to come over and try and help me. After he gave it a good shake and tried all the same things I did a store associate walked by, “There’s a safety latch on the side”. My friendly gentleman and I exchanged a glance first before he reached down and the stroller came back to life. GEEZE. They should really put out the manuals or something on the floor with the test models. I did it a few more times with the newly acquired knowledge and realized how simple it actually was.

Erik went back today and picked it up (from apparently an insanely busy Babies’R’Us) and we played with it a bunch more at home. I’m very pleased with the purchase  The babe has now been born and we’ve used the car seat a ton and the stroller a handful of times (my c-section recovery has kept me housebound for a few weeks)… Now to complete the review! 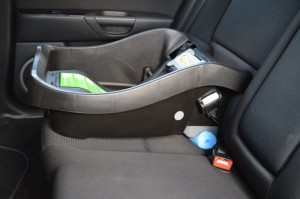 The install of the car seat was pretty straight forward… well once we figured out that the base extended to better fit the angle of the back seat. We have a Mazda 3 so it was a little tight getting into a good position to be able to pull the straps tight enough, but we managed (with some help from a police officer at a St. John’s Ambulance’s car seat check!). It took a couple tries to get the seat in the optimal angle, but we finally got it by using a single pool noodle to help raise it up.

Depending on the size of your car, the front seat will likely need to move up so you can slide your hand in between the back of the seat and the top of the car seat. Our passenger seat had to move up quite a bit and my 6′ husband won’t be able to sit in the passenger seat for the next year. This really isn’t an issue with the car seat but rather the size of our vehicle.

Day to day use 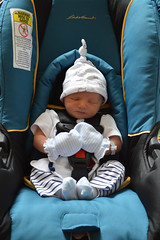 Nathan seems to love the car seat! Putting him in and taking him out is easy. There is plenty of added padding to make sure that even the smallest babies fit in snugly. Nathan was 7 lbs 2 oz coming home from the hospital and we had to remove one of the additional padding attachments that came with it. There are plenty of slots to string the straps through as he grows.

With the car seat base we can quickly get Nathan in and out of the car without waking him. We’re considering getting another base unit to put into our second car. The release button is on the top of the car seat, so as long as the passenger seat is up far enough, it’s easily accessible to take him out. We have to do a little turn and dip to get him out of the car once he’s been detached from the base, but again, that’s due to our car size, I don’t think it’d be any better with another car seat.

The stroller is a dream. Just pop on the car seat to the top of the stroller for now, and once he’s big enough, it’s a stroller all on its’ own. Again, we’ve only used it a handful of times since I can’t walk too far yet with my c-section recovery, but hoping we can get out a little more frequently soon! The experience isn’t too different with Nate in there compared to my purse (while I was testing it in the store). Still easy to push and manoeuvre. Had to pop a wheelie a couple of times with the tall curbs in our neighbourhood, which wasn’t the easiest, but I’m not sure if it’s due to the car seat – making the weight distribution a little off, but still doable.

Overall I would recommend this travel system. It’s a smooth ride for Nate and easy for me!